What is Regenerative Farming?

Regenerative agricultural practices take a more eco-conscious initiative to farming, aiming to cultivate a more symbiotic relationship between nature, and the crops and livestock we depend on. Farmers using these methods seek to prioritize soil health and nutrient density of crops rather than a bulk yield, employing a variety of sustainable and organic-rooted techniques. This means keeping the land as undisturbed and close to its natural state as possible, eliminating the use of harsh pesticides and herbicides, and limiting generated waste by upcycling or composting farming by-products.

Organizations like Regeneration Canada aim uphold these practices and unite farmers across the country in the goal to think differently about agriculture and the impacts of large-scale farming.

“The term ‘regenerative’ refers to a process – the process of improving one’s state. With regenerative agriculture, the journey improves the state of the soil, the ecosystem overall, the climate, and of human health,” says Alix Tabet, Membership and Farm Map Manager at Regeneration Canada. “Regenerative agriculture is based on principles of land management which reverse current trends of degradation in soil, water, and air quality by enhancing the soil ecosystem and restoring its biology.”

So, What Do the Benefits of Regenerative Farming Mean? 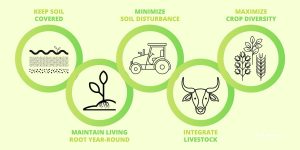 Regenerative practices aim to mitigate certain detriments of modern large-scale and industrial farming techniques. One important way is by devising crop plots to be more varied, containing multiple crop species and utilizing companion planting as a natural means of pest control and soil-nutrient maintenance, also often including naturally occurring wild plant life as well. This inevitably amounts to plots of land that are far richer in biodiversity and encourage native wildlife to remain in the area, in contrast to vast stretches of biologically desolate monocultures, which most often too drastically alter a habitat to support viable populations of native species.

Habitat loss is the main threat to wildlife in Canada, and in our home here in southern Ontario it is especially pronounced, with wetlands, forests, and grasslands respectively depleted by 70%, 80%, and 98% of the area they historically covered. As our population grows and so too do the demands of land and resources that come with it, identifying and adopting sustainability-conscious solutions such as regenerative agriculture could be key to preserving our unique local habitats and wildlife.

Most high-efficiency industrial farming techniques require a significant amount of plowing and tilling of the land. This in turn exposes organic matter contained in the soil which greatly expedites the oxidization process, resulting in the release of excessive carbon emissions. Over time this has amounted to a significant contribution of greenhouse gases being accumulated in the atmosphere.

As regenerative farming practices seek to eliminate or strictly limit tilling activity, it helps to reduce the release of excess carbon and further begin to undo atmospheric carbon levels by sequestering CO2  in the organic matter contained in the undisturbed soil. On a large enough scale this could easily begin to yield measurable results and assist in limiting impacts of climate change related to a runaway greenhouse effect.

Regulating Soil Health and the Water We Depend On 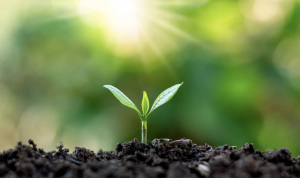 Since much of the land on regenerative farms is allowed to remain consistently undisturbed, deeper and more permanent root systems are enabled to grow, helping to stabilize the soil and prevent its degradation. This means there is far less runoff from the land into nearby bodies of water as the roots hold the soil in place and prevent erosion. This, in addition to the lack of pesticides and potent fertilizers routinely used, translates into a minimal impact on watersheds relied on by humans and wildlife alike.

“Soil is one of nature’s most complex ecosystems and one of the most diverse habitats on earth,” says Tabet. “It contains a myriad of different organisms, which interact and contribute to the global cycles that make all life possible.”

The principles that regenerative farming practices stand for and uphold exemplify many of the ideals and goals we here at FreshFind strive to embody as well, with practices aimed at maintaining sustainable business models and the enrichment of the local and global community.

If you would like to find a farm near you that that utilizes regenerative agricultural practices check out Regeneration Canada’s farm map here!